A  press conference was held at the Lounge Garden located in Bonapriso (Douala) to announce the signing of a partnership between Blanche Bailly, Ludwig Yenks to Prince Deido Company.

This partnership will now consist in the management of the Booking of the aforesaid artists and in the development of their careers both nationally and internationally. 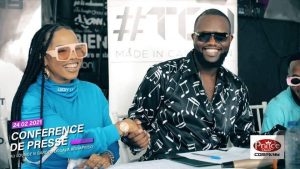 Blanche Bailly and Prince Deido after signing their Booking Deal

It aligns itself in a responsible and organized direction of the artistic life of these Entertainers.Ludwig Yenks  with this collaboration, aspires for a better future and a good vision of his career.Note that Up to now Blanche Bailly had always worked as an independent, this partnership comes therefore like a breath of change of air for Queen Mimba.

After the signing of the contracts, the question phase followed during which the Mimbayeuse kindly provided clarifications on her performance (much criticized), during the concert of Fally Ipupa in Douala. She made us understand  that originally , she had planned to do a Live, but that it was that day in the dressing room  that she learned that no Cameroonian artist had the right to perform live hence her mediocre performance.

We hope that this partnership will be long and fruitful from now on, Good luck and Congratulations to them.