Cameroonian rapper Taku Joel A.K.A. The Leader of the New Wave after dropping a series of singles this year brings us his first body of work. A 20 tracks mixtape titled “THE NEW WAVE MIXTAPE” which harbors well-received singles such as 3:30, 100 Percent and Gare Routiere. 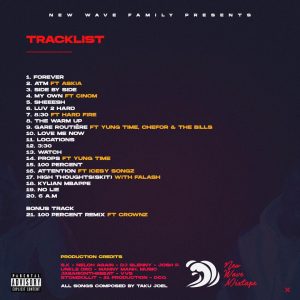 Taku Joel’s debut mixtape was graced with the presence and rap verses from rappers and singers such as Yung Time, Askia, Chefor, Cinom, Icesy Songz, Hard Fire, as well as producer credits to producers such as Unkl Dro, Neloh, Deejae Glenny, S.K. and many more; it’s safe to say the Mixtape is a hot one. Get the full Mixtape available on YouTube and Audiomack.