Cameroonian Blogger and Media man Yannick Baba Tee of Kamervibe.com just expressed his dissatisfaction about the new single released by    NOSLiiPGANG   titled Medication. Yannick expressed the amaricanized nature of the lyrics and lack of creativity, at a time when there was the need for the Rappers to raise awareness on the “Tramadol abuse” which is currently affecting many in Cameroon.  As a Music Critic and blogger, Yannick frowned at this recently released song from the Rappers, and  called them to seat up and man up to release good, and meaningful content that can educate the public.  “Medication” was  Directed by OTANTIK FILMS/NOSLiiPGANG  and Produced by Jayon OTB.  See the full screenshot below, Listen, Download and leave a comment behind. 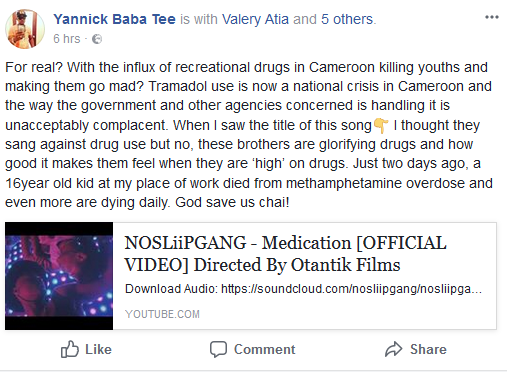