“No publicity they say is bad publicity” but when content creators use false claims to create publicity stunts that are later on disproved, it becomes a desperate move and can be termed a “Funny Lie“.

This is the case with Cameroonian rapper Maahlox Levibeur. Taking a short break in the musical scene, the rapper placed his focus in the creation and running of his popular Snack Bar known as “Boivement“. On coming back to make music that will burst the speakers of his snack this festive period, Maahlox released a brand new explicit video titled “Tu Veux Enlever?” meaning “Do You Want To Take It Off?” which has been greatly criticized by some fans for being too explicit.

Team 237Showbiz visited the rapper’s YouTube channel and discovered that the content (Videos) on the rapper’s channel have all been set to “PRIVATE”. This means that only him can see his videos and others can only have access to these content if and only if he grants them access. Below is a screenshot of how the rapper’s YouTube looks like; 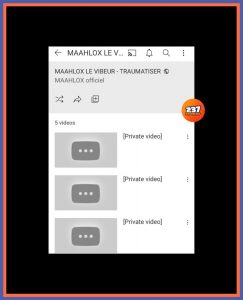 Looking at the the YouTube channel and Maahlox Levibeur’s death threats to the so-called perpetrators, one can easily conclude that its a desperate move and funny lie to draw attention to his most recent single and video. This still defends the saying that goes thus; “No Publicity Is Bad Publicity“