Rhymesity and Nebangu Muzik are proud to present Cameroonian music producer Blahk Santa and Cameroonian rapper Blueprint Hakeem’s EP titled EXCUSE MY ENGLISH on the 19th of August 2017. This 5 track EP will be free for downloads on some Cameroonian websites including the websites of both music houses, while internationally it will be sold on major international online music stores. Rapper/songwriter Blueprint Hakeem is a maverick in the Anglophone Cameroon rap scene. He’s well celebrated in his hometown, Bamenda, by a great majority of hiphop fans due to his ability to talk about societal issues, love and pain. His lyricism and stage prowess has always caught the crowd’s attention. He’s also catching even more buzz with his debut album released 7 months back entitled COLD LIKE ALASKA. He teams up with hiphop music producer Blahk Santa to create in just 5 days only, what they like to define as “the fastest and most challenging audio job they ever faced”. The duo decided to switch styles on this EP. Santa got in hard with trap beats, evident with tracks like “SWITCH UP“, wherein Hakeem goes out of his normal laid back trend to spill what might become Cameroon’s fastest rap verses ever heard. They also go reggae on tracks like “MURDER” wherein Blueprint will docsome singing.

“It’s hard to imagine another artist and producer on the 237 hiphop scene with so much hardcore feelings, create such a short but versatile record just in under a week. But these two did”.MAD SCIENTIST – 237 MUSIC CRITIC

“I have been following him since day one.Blueprint Hakeem is a rapper to watch out for. Get all his songs and attend his shows” TITO VALERY – CAMEROONIAN MEDIA PERSONALITY ”

This is one of the best projects i have listened to this year. Switch it up bwaii.  ” EMMANUEL MFON – CEO 237SHOWBIZ.COM 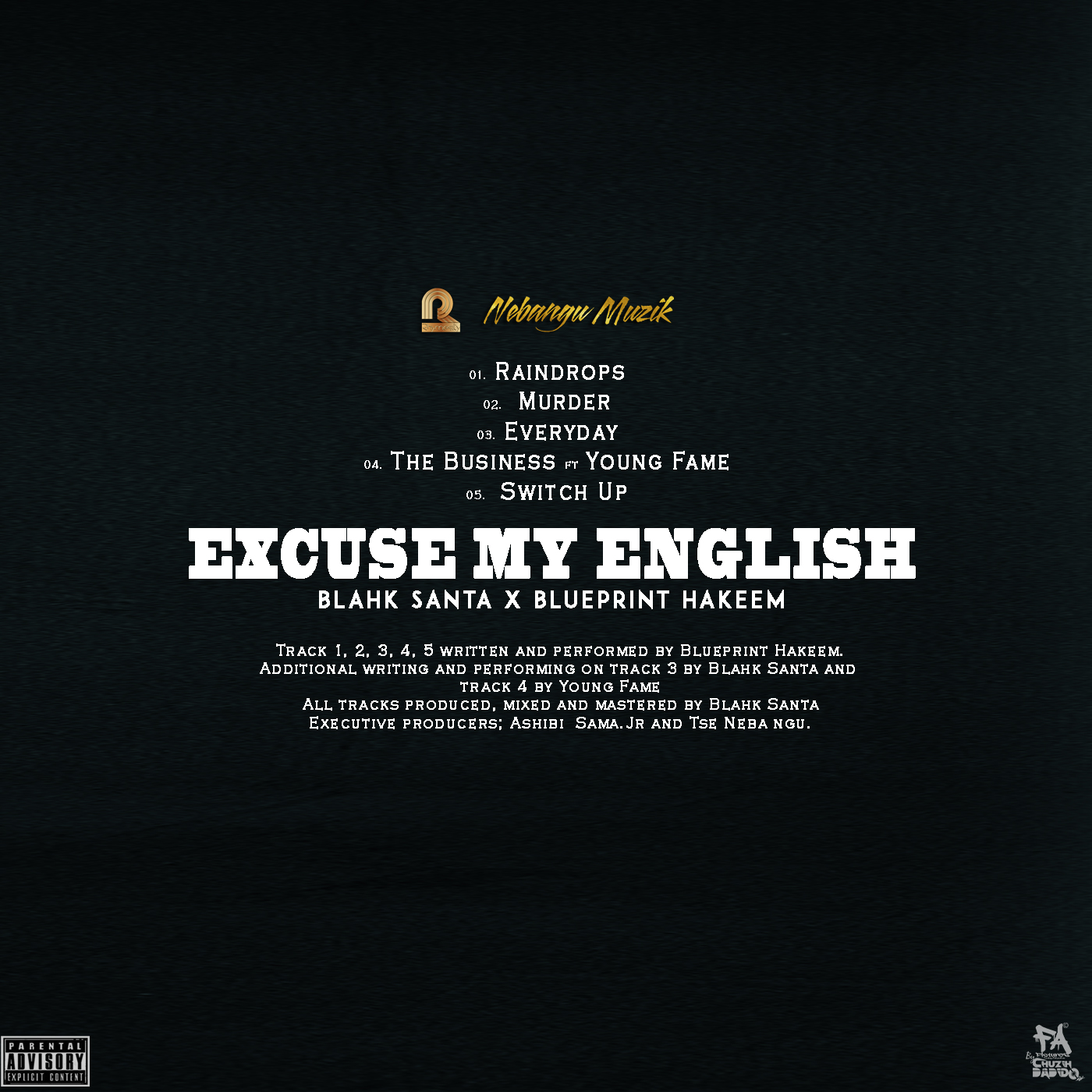 EXCUSE MY ENGLISH is an almost entirely English album. The EP features YOUNG FAME (Hakeem’s brother) of Nebangu Muzik on track 4. Blueprint and Santa are excited to grab fans of 237 hiphop and show them another side of language (English), flow, lyrics and beat making. Videos for two songs from this EP album will follow after audio release. There will also be a listening party for fans. These and more will be announced on a later date. Be sure to visit Blahk Santa and Blueprint Hakeem’s well-crafted websites for mp3’s, videos, wallpapers and more. Use these mentioned online handles: