As you all know, the joy of filling up stadiums and shows will remain in the hearts of our favorite Cameroonian artistes only after they’ve accomplished this great task which happens to be a dream for all artistes today. I do not need to tell you the amount of joy in Maahlox Levibeur’s heart right up to this date and the pressure on Tenor’s who will be gladly doing same on the 18th of July 2018.

This epidemic ”filling up shows thing” seems to have contaminated New Bell Music boss Jovi as the rapper’s label released a teaser poster on it’s Instagram page yesterday about his first ever concert in his entire career. A Mega Concert which will take place at Etoug Ebe, Yaoundé. According to the poster, tickets will be sold at 3000CFA, a dress code of either all white or black. 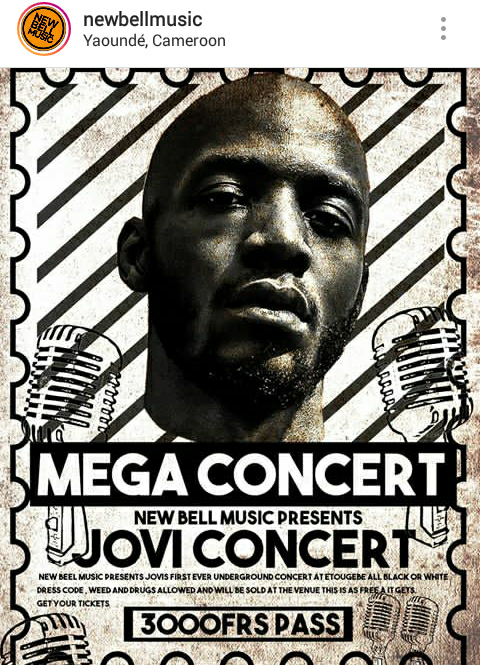 The above information didn’t bother both Jovi fans, music lovers and critics. What caught the attention of many is the fact that the poster points out the sale of weed (Indian Herm) and drugs. ”I know about weed but not the kind of drugs the concert is out to sell, is it Malaria treatment? Anti retroviral drugs or the concert is out to promote the use of harmful drugs? Fans question!”

Others see the concert as one which is organized to capture a set or category of Jovi fans. ”Mind you, not all lovers of Bob Marley smoke weed, some are allergic to even cigarettes. How then do you think they will be comfortable in a setting of that caliber?”