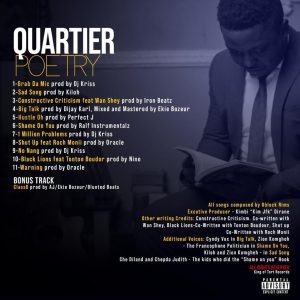 The library of African Hip Hop is about to witness an update in its RAP shelves as Cameroonian rapper “Dblock Rims” currently signed to the label “King of Torts Records” is more than ready to deposit archives of his debut album titled “Quartier Poetry” made up of 12 tracks, feeding HIP HOP fans with exciting bars and stories that reflect the cognitive experiences of the average Cameroonian. The rapper expresses himself effortlessly in pure Hip Hop bars using languages such as Lamnso, English and French. The Quartier Poetry album goes ahead to celebrate some of Cameroon’s producers who work everyday most especially on the album to deliver the best melodies such as DJ Kriss, Dijay Karl, Kiloh (Of Blessed Memory) Ekie Bozeur, Iron Beatz, Perfect J, Ralf Instrumental, Nino and Oracle.

Dblock Rims also joins forces with fellow rappers to deliver magic in this lively body of work. We see the likes of Roch Monii in track 8 titled “Shut Up, Wan Shey in track 3 titled “Constructive Criticisms” and Tonton Boudor, known as the Godfather of Cameroonian Hip Hop in track 10 titled “Black Lions. 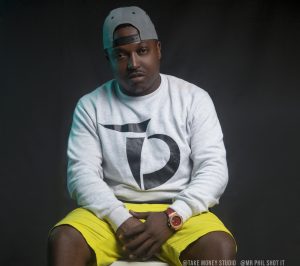 The album is slated for release on the 30th of August 2020 on the streaming platform ZikTunes. Getting the album depends on fans mentality. You can either download/Stream for free or purchase by supporting the artistes.