For some time now Rumors have been flying around that Cameroonian Rapper Ndimofor Pascal  AKA   YungKing has cut off ties with Cameroonian Record Label Strange Kings. According to my findings,  after Ndimofor Pascal  left NewBellMusic, a lot of labels were trying to sign him. Massango Records,  Alpha better and Big Dreams were some few who were trying to capture the talented Rappers attention. After all the talks, Pascal decided to go for Stange Kings, the label house of Dancehall sensation Benzil.

After some reasearch i found out that  the relationship between Pascal And Strange kings has gone sour, and all these While Pascal was unofficially signed to Strange Kings which means both parties had an agreement without an official contract stating the terms of the Agreement. So recently when Strangekings presented an Official Contract,  The Rapper refused,  to sign and has since then been riding solo Alongside his Manager Rullo.

With this dissapointment Strange Kings  has  decided to work without him.  The Record Label wasted no time in making this Clear as they deleted Ndimofor Pascal’s Name and pictures under the artists Category on their  official website  (See Here).

The Label also made a post on their facebook page on Sunday December 17th, announcing  that they will be investing 100 Million in Partnership with Hit54Studios. In that post they hashtagged only Benzil’s name….Hence confirming the news that Pascal is off the label and the Rapper won’t have an inch from the hundred Milli they will be investing. 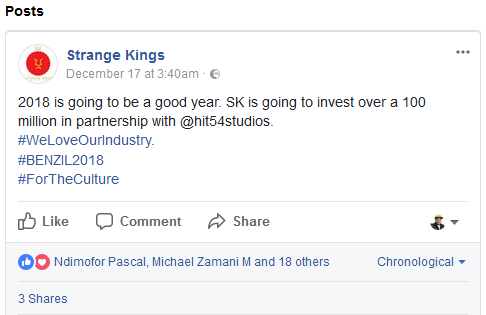 I wish both Parties well, as they move forward on their seperate lines. Do you think Ndimofor Pascal  has what it takes to Ride Solo ? Leave your comments below.