Skidi Boy And Tilla Tafari Go Head To Head! Who Is Speaking The Truth?

The mid month of the year 2018 is obviously the month of clashes and beefs amongst actors, artistes, bloggers and stakeholders of the Cameroonian music industry. Just when we though we had seen it all, another feud erupted yesterday when SB Nation’s front line artiste Skidi Boy threw shots on Tilla Tafari a.k.a God Mother. The Nanga Mboko rapper claimed Tilla Tafari underestimated his potentials as a young rapper growing up. See screen shot below.

Meanwhile, Dedes Record’s Tilla Tafari looked confused and shocked with the statement of Skidi Boy. According to her, she never had any conversation as such with Skidi. She goes as far as calling him a Jovi wannabe rapper. 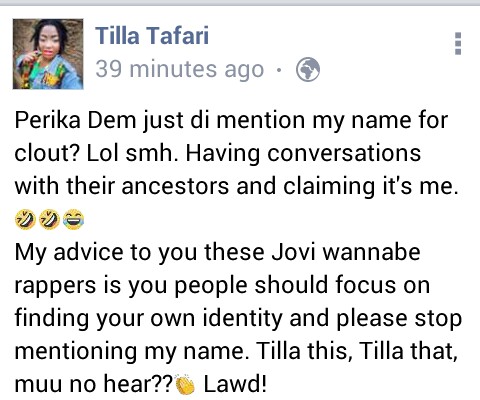 Well, we don’t know who to believe at this juncture. Skidi or Tilla. However, screenshots of their conversation might prove either Skidi Boy right or Tilla wrong and vice versa. But in your opinion, what do you think?