Vanessa Monjoa Smiling To The Bank Yet Fans Frowning At Her

Never underestimate the power of social media. Facebook in particular with a trending hash tag can put anything or anyone out of order in their right place.
Monjoa Vanessa winner of the 2017 Mutzig Star Competition organised by SABC didn’t receive her prize money and car months after she was declared winner.

Worried about the manipulations by the organizing committee, friends, fans, well wishers and her family started a campaign under the lead of journalist Dulafe Valery. They started a campaign with the hash tag #PayVanessa. While others were fighting to see her get what she deserves, she decided to stay silent and only opened up yesterday. Rumour has it that she was asked to write all what she posted on her official Facebook saying; screenshots below. 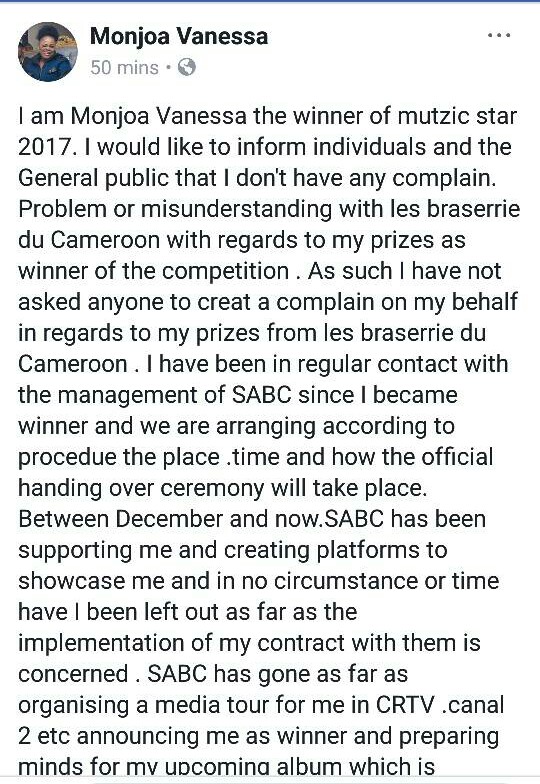 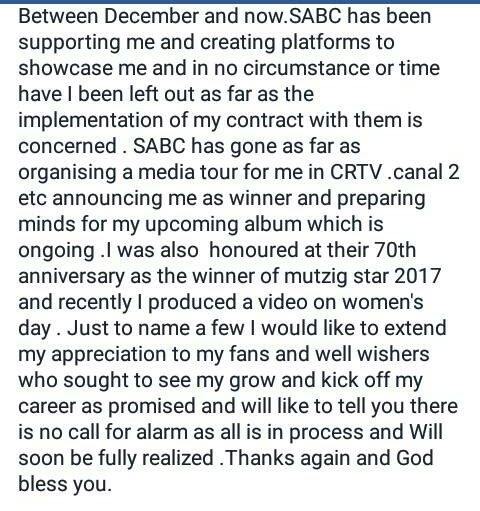 Many well wishers who took out time to join the campaign weren’t happy with her choice of words.
Some even wished she never gets paid. Although she may be smiling to the bank, many will be frowning at her.

Fortunately for her, news getting to us is that proceedings have begun to see her reap the fruits of her labour.
Mind you, all this is coming after the campaign on social media was adopted. It looks like she lost some fans from her speech. We all hope you accept her mistakes and push her through.

It is worthy to note that these same fans she insulted played and will still need to play a greater part in her career. There’s no way she can produce music, buy it and listen to it herself. She needs the fans.