The Bamenda Golden Boy Magasco is now more than ever a household name in Cameroonian Entertainment, not only because of his music, but because of his increasing concern for societal problems, his humility and most recently his great concern for the growth of our music industry. Magasco seems to have taken upon himself to be the thinking head of the Cameroonian Music Industry. First, his cry for his fans to join him call out the leaders of the nation to come up with a solution for the crisis in the English-Speaking regions of the country, and now he reveals his thoughts on the particularities of the Cameroonian music industry in relation to other music industries. In a recent status update on his Facebook profile, the “Wule Bang Bang” hitmaker exposed his thoughts which as he claims stems from his private research on the reason why foreign artistes have a lot of acclamation and success in Cameroon while Cameroonian artistes don’t witness the same elsewhere. 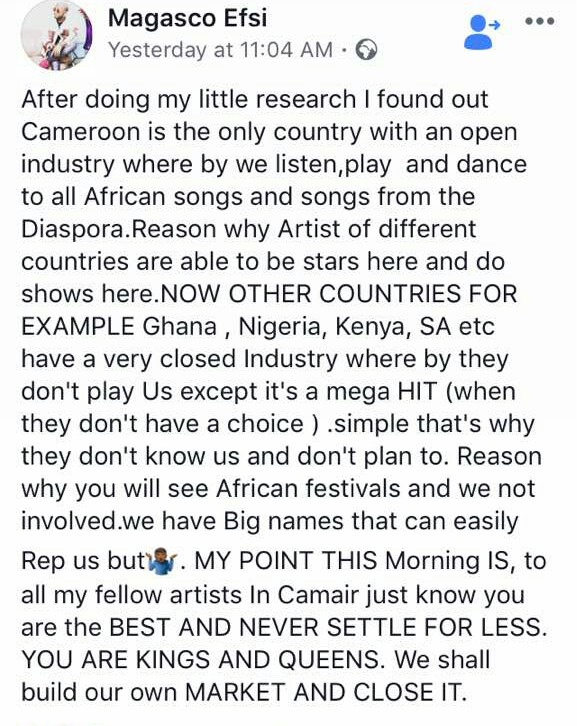 According to Magasco the Cameroonian music market unlike others is open and as such we easily listen and dance to foreign songs from both our neighbours and the diaspora irrespective. Meanwhile else where Cameroonian music is only played when it is a mega hit, that is, when there is no choice. Assuming this thoughts of Magasco are true, it will mean that we in Cameroon do not adequately support our own and are too easily swayed by foreign things and that is why our music industry is still creeping.

This can also be seen as a subtle way to place the blame of the slow growth process of the music industry in Cameroon at the doorstep of the fans while making the artistes themselves look like victims of a great injustice. Well, we will love to know what you think about these statements by Magasco and also to encourage us to be more supportive towards our artistes because after all, charity begins at home.