World heavyweight champion, Francis Ngannou is back in Cameroon after his brilliant performance last month at the Ultimate Fighting Championship, UFC in Las Vegas, America.

The 34-year old who hails from Batie, a locality in the West region of Cameroon arrived the country via the Douala International Airport this Monday April 26 in the afternoon.

Upon arrival, he was received by the Governor of the Littoral region, Samuel Dieudonne Ivaha Diboua. 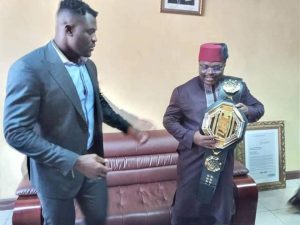 Ngannou and the Governor of the Littoral Region

Francis Ngannou is currently touring the city of Douala with his Heavyweight championship golden belt in the presence of his mother.

The Cameroonian-born made history when he shattered his American opponent, Stipe Miocic 52 seconds into the second round of a UFC confrontation Saturday March 27 to become the first African to hold the title of the world heavyweight champion in the category of mixed martial arts.

Following this historic win, the athlete received congratulations from all over Cameroon and beyond, including those of the Head of State, Paul Biya who indicated in a message that with this performance, had joined the circle of illustrious Cameroonian athletes who make the Green Red Yellow proud.