The African Nations Championships Popularly known as the CHAN 2020 was launched about a week ago for the 1st time in Cameroon. After a successful launch, matches began between the countries in their respective groups, and on the day after the CHAN launch (18th Jan 2020), along came a short power cut at the Japoma Stadium before the match between Uganda and Rwanda. This phenomenon became a trend among the Cameroonian community (both online and offline) as the Cameroon government was questioned on its professionalism as the Host Country. However, this article is to actually reduce the tension with the issue at hand as Cameroon isn’t the first country to have a power cut before, during, or after a game in a stadium. These blackouts have been common among several nations or sports competitions. 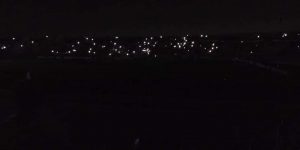 An example of this is the Super Bowl XLVII in 2013, which famously suffered from a 34-minute power disruption in the New Orleans Super-dome. The power seizure was widely discussed at the time, prompting emergency meetings with the New Orleans utility committee. But for many, this was only the first episode in a series of memorable blackouts at widely attended events. 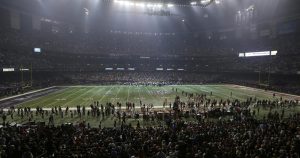 Another example of a similar power cut is the 2012 match between Argentina and Brazil where a failed power grid ruined the match between both nations in 2012 in front of a packed crowd of over 25,000 in the  Estadio Monumental Antonio Vespucio Liberti (Argentina’s National Stadium).

With half the stadium’s main lights dark, players operated in shadowy conditions for minutes. Referees finally made the call to stop the game after goalies on both teams commented that they couldn’t see incoming shots.

Crews couldn’t guarantee when the lights would come back on, prompting Mano Menezes, Brazil’s head coach, to comment that a country of Argentina’s stature shouldn’t need to worry about electrical problems. Brazil, ironically, experienced similar issues in 2014 when hosting the FIFA World Cup during a match between Seleçao and Colombia in the Quater Finals.

A similar phenomenon also occurred in 2011 in a friendly between Spain and France and this however is the most identical incident to the Uganda Vs Rwanda game at the Japoma stadium in Douala as this game was played at the Vincente Calderon stadium in the city of Madrid and a power cut occurred when the players were still warming up (30 mins to the official game) and this didn’t cause any confusion as the issue was fixed 10 minutes after that and the lights at the stadium came back on.

With these issues becoming more frequent, Engineers and Electrical Technicians suggest the best way to limit this phenomenon is to always inspect and check the equipment and machines before time as this will tell if there is a problem or not hence will be better to solve electrical issues before time and preventing embarrassments or scandals beforehand.

At the end of the day, power cuts are often unavoidable; they can occur as  a force of nature. However, venues that take preventative measures can increase the likelihood of protecting their equipment and personnel in the event of a surge.So we shouldn’t be looking at  the fact that power seizure happened in Cameroon but at how to instead make sure it doesn’t occur next time . After all, safety first.

About the Author: Pharell