Dr Nkeng Stephens is arguably the biggest name When It comes to Music Directors in Cameroon . He has built a very strong brand and fan base for himself with his outstanding and impeccable works . From Videos like “Kemayo  , My Way ,Anita etc. There is little that could be said about his output , there was a time that he accounted for more than 50% of Hit Videos in Cameroon . He has also been in Charge of more than 500 videos meaning he is far from being a small boy in the game . 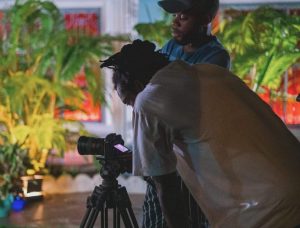 The debate of whether his prices are reasonable or not is one for a different day but however this has significantly seen a reduction in output for the Camera Magician as he has gone from releasing 4 videos a week to releasing  1 or 2 videos a month .

Statistics prove that his colleagues in the music Industry like Mr Adrenaline and Chuzih have seen a constant increase in output as they shoot more videos than him as of late 2020 to present date 2021.

We tried to examine why this is happening and have inquired from numerous artist and Music experts about this situation and word on the street is that  “ Due to the Corona Virus and the shutdown of numerous shows, Most Artist can’t afford to hire his services .They see it better to meet his colleagues and get lesser or the same quality and concept for a lesser price thus this now leads to a reduction on his output“.

Another unnamed Artist said “ he has run out of inspiration  as you could see nearly the same kind of shots in his videos. The same video vixens and the same poses . He isn’t as creative as he used to be but he has camera quality .”

We also highlight that he spoke about going into Movies In 2019, After directing more than 500 music Videos in Cameroon, The Director hinted us about his dreams to get into the movie sector. He might be working on Movie Projects now reasons why he is taking Fewer Shots.

With all the recent happenings in the music Industry ,  The Music Industry will love to see the Camera Magician back in a consistent basis and we are sure his fans also want to see him consistently as  his brand keeps on fading the more he becomes Inactive in his job and focuses his attention more on movies and  CPE Music his newly created label.