Dr. Nkeng Stephens Reveals The Cost Of Daphne’s My Lover Video And His Lowest Price.

The Doctor himself Dr. Nkeng Stephens who is largely acclaimed as the best video director in Cameroon Entertainment and also the initiator of the Hold Hands Movement was bonding this week with his fans on 237Palava.

As expected the public had many questions to address to the video directing legend and they did come out tough,while he was quite open and revealed a lot about his work and career. The video directing guru revealed that he was once a singer/songwriter before answering the call of video directing, he was asked by the public how far his Hold Hands Movement is helping the industry and he spoke about CPE (Cameroon Phase of Entertainment) tutorials and also mentioned that he is actually training 3persons who he believes will be as good as him in no time.

The most pertinent question raised concerned the price tag he puts on his video editing services. He emphasized on the quality he intends to maintain in every video he works on and as such he cannot take less than 1,000,000CFA Francs and yes your eyes are not deceiving you, the most shocking revelation of the interview was that Daphne’s “My Lover” video costs 3,000,000CFA Francs. 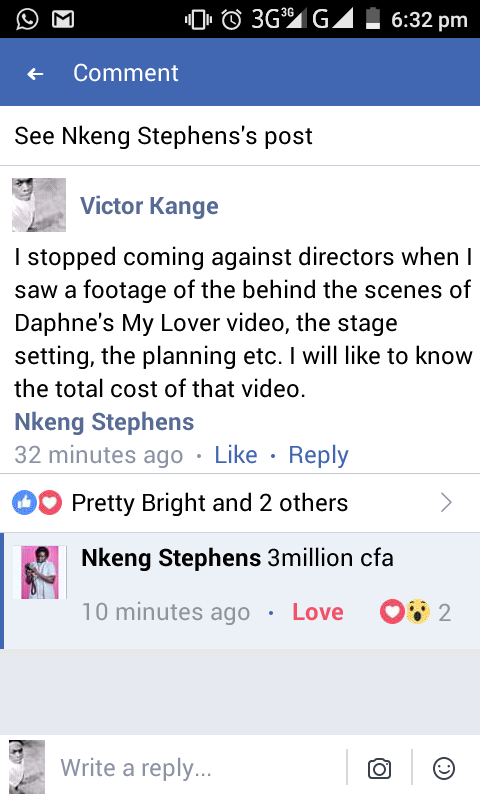 Well, these prices have been largely criticized, mostly by upcoming artists as they of course will have a hard time paying such a fare. We cannot really blame Dr. Nkeng Stephens for these prices,can we? Given that he emphasizes on high quality and we all know good things costs money, it will also be necessary for artists to go for what they can afford while aiming higher. The Doctor just released a short movie entitled “Caesar” be sure to check it out and enjoy.