New Bell Music boss Jovi LeMonstre is one very unpredictable rappers in the game, his moves are quite tricky and always full of suspense. Jovi although doing previous projects with other Cameroonian artistes in the past has been locked within the borders of his label in the past few years. However, the last days of 2017 saw a great change in the rapper’s attitude and behaviour as he became more open and interactive with the fans. Many followers of Jovi have pushed him to the limits to do collabos and work with other artistes. Although he works without exposing these projects, the Mboko God seems to be bringing to the open more of his coming works.

His recent twitter fingers are said to be in a confession season as he reveals he’ll be working with an artiste (Name Withheld) but promises maximum exposure in the days ahead. 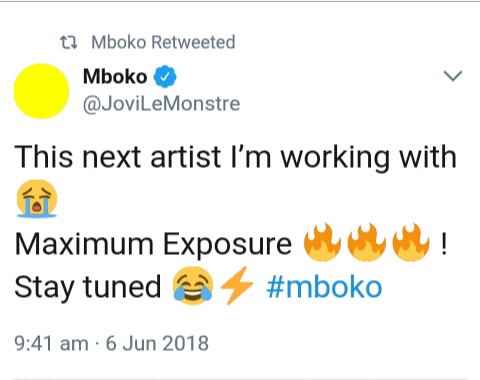 Who is the artiste? Do you have an idea?