Black Fame Music is located in the North West Region of Cameroon in the city of Bamenda, and is abbreviated B.F.M. BLACK FAME is a 6 years old group and it is made up of the main signed artists of this label. They follow the brands of HIPHOP and AFRO. Black Fame is made up of artists such as Fonki Journi (Fonki Njinwi J.), Remi KG (Ndam Remi), EXP-K (Neba Christian F.) and Pizzy Jay (Neba Ransom C.).

They started far back in secondary school (GBHS Bamenda). This was a group of young guys who loved music with so much passion, so they started with freestyles in class, rap battles and other clashes during school events. In 2013 they formed a music group called “SETUS”. They performed locally at school socials and other talent shows such as the TALENTED BAMENDA. In 2014 they got nominated for the Project New Bamenda Award (PNB 2014).

Furthermore by 2015 they recorded their first single titled “CUT PUSER BE NA WORK” which they used to gain some showbiz grounds around the streets of Bamenda. Throughout 2016 and 2017 they performed in shows and also as guest artist in the “Almost A Night Award Show” organized by Noble Art Entertainment.

In the beginning of 2018, they released a cypher video titled“KITCHEN CHAIR”. This was their first video. Also, they organized an art promotion show URBAN SHAKE UP, which bought together artists like Spirit T, Seem Bizzy, Young Holiday etc to promote upcoming artists, Fashion Designers and Models in Bamenda. Besides this, they also partnered in organizing the PEP BONANZA show and the Talent Hunt show. 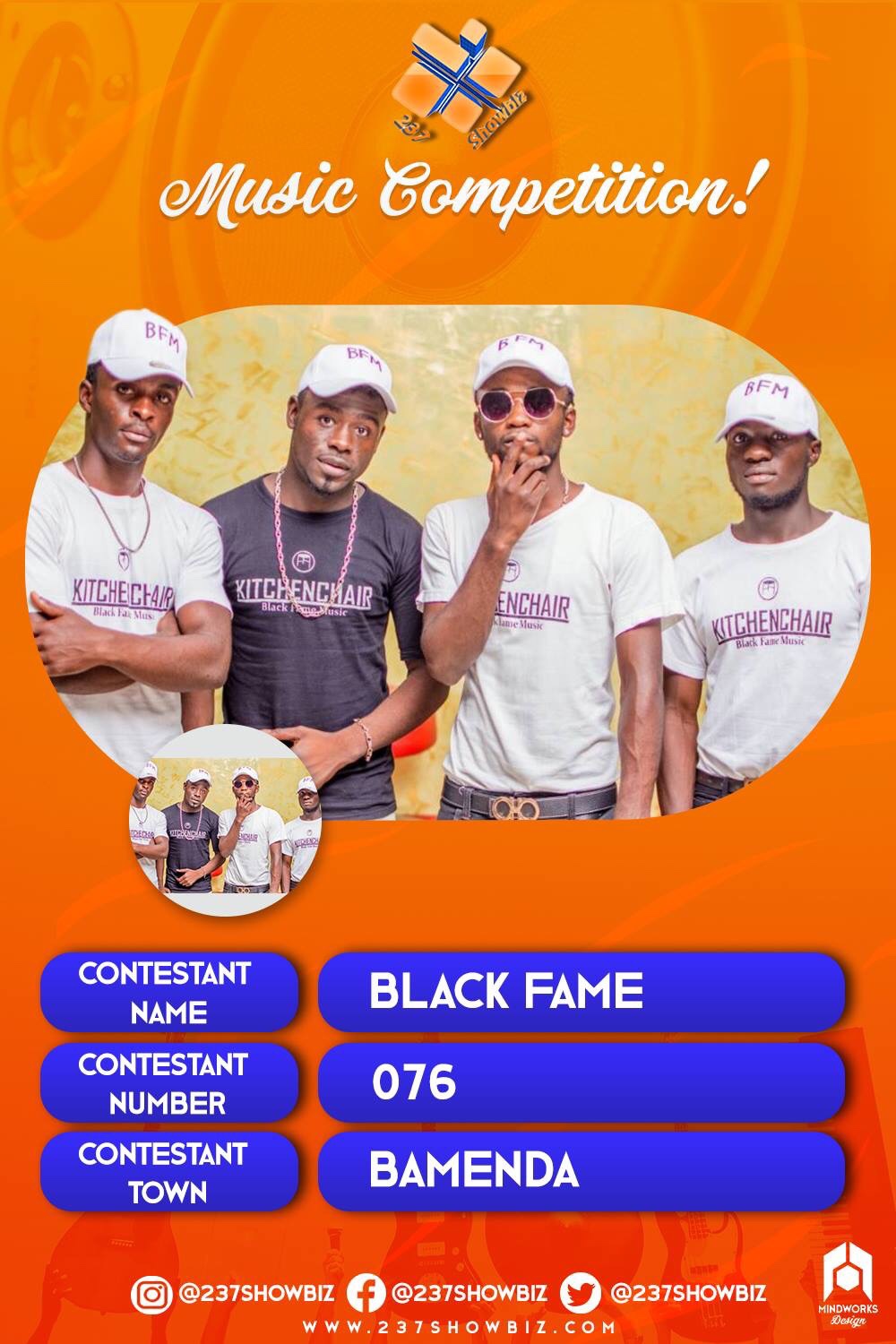 Black Fame has successfully moved from the Quarter finals and Semi finals by producing videos of the song KONGA (Rap) and CAROLINA (Afro Love song) respectively. But with all this incredible sound track, there must be a great brain behind its mixing and mastering, he is no other than the black fame music sound engineer who goes by the name of X-Xone. While MrMcCoy, Edi Le Dre and Eno on the Track has been the producers of the beats used through out this competition.

In the future, they prepare to release more audio and video tracks and also aim at getting sponsors for their next and other upcoming projects. They also would be dropping the official video of the song “CUT PUSER BE NA WORK”, go for Radio Tours and TV interviews.

Besides being artistes, they got other activities.

The crew is backed by their parent’s acceptance and love for the music path which they choose to partake. They have also listened to their songs and even attended some of their showcase performances.

Black Fame if we emerge winner of this Season II of this competition we’ll continue in doing what they have been trying to do. That is taking every art as one in equality. This notion of theirs has promoted and helped other upcoming artists by organizing shows and invite them to showcase their talents, examples of such is the recently hosted URBAN SHAKE UP show which brought together so many upcoming artists and also giving them free online and offline promotion. Provide a forum where they can get to meet some popular artist which they know, to see how they perform and also utilize the same platform.

The 237showbiz is a platform that does not only help to showcase talent, but helps market and bring to the public hidden faces in the music industry. It promotes without discrimination, that is from young children to adults. Example is seen in the young girl (OTANG) highly pronounced as a good female rapper amongst the adult likes of TILLA and ASKIA, and the youngest male rapper KOWAN a kid within the age range of 5to 7years.

Apart from promotions, they also organize events and as such, 237SHOWBIZ.COM is to Cameroon as NAIJA_OK.COM is to Nigeria music industry.

From the great experience the Black Fame has gained in this Season II of the 237showbiz music competition, we encourage all young artist who love music to sign up and participate in the next edition of this competition and please don’t minimize this opportunity because it will cost you nothing to be this patient. This is because you don’t only stand the chance of winning the grand prize but also because your talents get exposed to millions of people out in the world and who knows? You could get an opportunity of being sponsored by an admirer of your talent. Please do signup.

Thank You and God Bless You All