Salatiel Shares His Worst Experience As An Artiste, calls himself a Prophet

It always sounds weird to some when an artiste complains about his/her song stolen, or his ideas implemented or executed before him or her. Reactions from the public at times is that the artiste is searching for cheap popularity or just proving to be lazy. Well sorry to break some of you down. Songs and art can truly be stolen. Examples of some famous songs stolen is 2Face’s African Queen. This song was said to be stolen from Faze. A Nigerian singer. Fortunately, both talents are now in good terms. Another artiste accused of a stolen song is Blanche Bailly. She was accused by Gomez for stealing Dinguo.

Coming back to oue main focus, Alpha Better Records boss and talented producer Salatiel shared with his fans and supporters the worst experience he ever encountered growing up as an artiste. Salatiel in his own words claims a music group by name Virus Squad stole a song he did with an artiste by name Rude Boy and the group went as far as shooting a video without the #SanComplexe singer no where near the scene. He added that he was also threatened to stay mute and will be dealt with if he ever made mentioned of it anywhere. Salatiel had to deal with this for over 8 years as he felt depressed as time went on.

Below is a screen shot of the original post and a link to the music video. 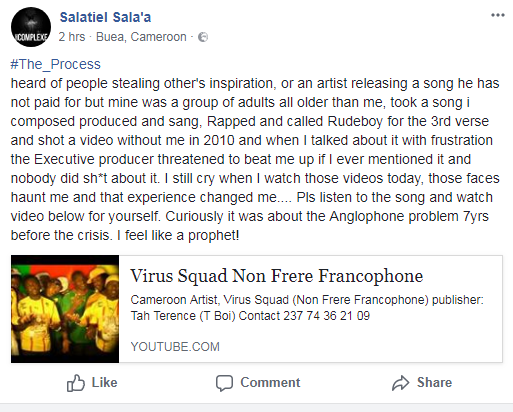 There are many people deprived of their art and exposure in the world today. How will you tackle such an issue if you were in Salatiel’s shoes?